Peace of Mind in a Power Plant

When Ecospec approached the Company with BacComber, they found the concept promising. Their General Manager had used our system previously at another power plant in a sugar company and was highly impressed with our ULF Technology.

They analyzed the possible risks and the potential that BacComber had for their Plant. The technical discussions went on for 3 months. They felt that the very job of an Engineer is to continuously improve upon existing practices and technologies, and strive to make operations as safe and environment friendly as possible. Their Group is renowned for implementing new and innovative technologies successfully. This positive approach made them implement BacComber on their 5,500 m3/ hr flow rate Cooling Tower. The system was installed and commissioned in April 2010.

They decided to monitor the various water parameters bi-hourly for first few days. They completely stopped all chemical additions to the Cooling Tower water including almost 300 kg of daily Sulphuric acid dosing. Initially the water parameters were maintained at existing levels. But after one month, their confidence in BacComber grew and they decided to increase the limits. After 3 months, they opened the condensers as part of their routine maintenance schedule and found them to be absolutely clean and free from hard scale. Then they stopped the bihourly monitoring of the water parameters and reduced the frequency of testing drastically, as they were assured the treatment is constant and continuous.

In this case the water that comes into the cooling tower (makeup water) had 100 ppm of Calcium hardness with COC (cycle of concentration) of 4 it is expected to go up to 400 ppm. But the actual value was only around 120-200 ppm. This means about 75-90% of Calcium hardness was removed from the water as it was recirculating.

When the Calcium hardness is reduced to such low levels, the risk of hard scale is slashed.

Reduction of Calcium hardness in recirculating water of a cooling tower is a unique phenomenon associated only with BacComber Treatment. 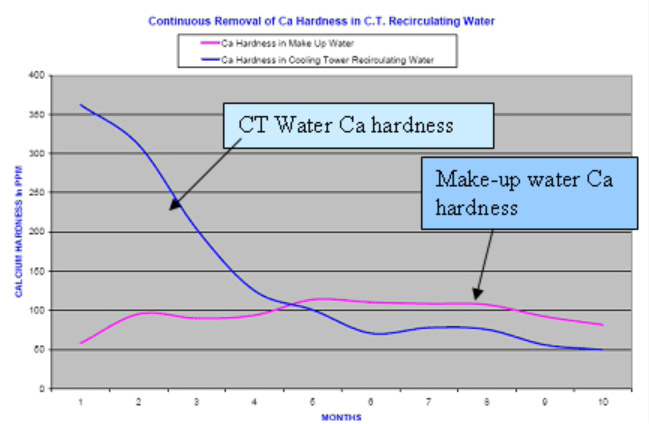 It is now in operation for 7 years.

They were so happy with the performance and service of that we got a repeat order from them for additional 10,500 m3/hr cooling tower.